The German Kriegamarine “Pocket Battleship” “Graf Spee” was of The “Deutschland” Class of “Armored Ships”. Historians often debate that “Graf Spee” and her “Sister” Ships (2) – were “Heavy Cruisers”. Germany so classified her as a “mini” Battleship. The “Graf Spee” was launched in 1934 and deployed to Patrol The Coast of Spain during The Spanish Civil War. She did not engage in combat. At the start of hostilities with England, She racked up an impressive 10,000-tons of sunk Merchant and Military Shipping (1939). It was in 1939, that “Graf Spee” engaged (3) British Warships at The Battle of The River Plate (South Atlantic, off South America). Inflicting heavy damage to The British, “Graf Spee” also was damaged (but still effective). He Captain feared eventual capture and scuttled her so she would not be captured. 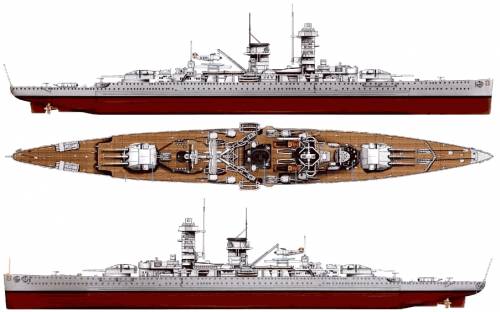