An iconic piece of history, the German Pickelhaube Helmet was the standard headgear of most Germanic Nations. Originally designed and developed in Prussia around 1842 under commission of Emperor Frederick William IV – the Pickelhaube was designed on previous helmet types used by many Nations during The Napoleonic Wars. Form fitting, the steel helmet was of 2-piece construction. A single fitted piece was formed with a slight sweeping front brim and a corresponding rear brim (that swept back to protect some portion of the wearer's neck. A small steel, Spike was attached to the very top. The Spike design was originally a three-pronged design (with subsequent versions being more rounded or smooth). Similar design concepts helped develop like headgear in England (and even in The American Military for a brief time). Ceremonial versions may feature high feathers or silken plumes.

In the 1890s, protective covers were created to help protect the helmet from wear and tear (they were expensive to produce!). Colors varied from Gray to later Black and Olive-Drab. The effectiveness of The Pickelhaube on a “Modern” battlefield was much to be desired. They were ineffective against the newer cannons and artillery using high-explosive round with greater range and accuracy. They provided little to no protection to the sides of the head. This would lead to their eventual replace in 1915-16 with The Stahlhelm (although some Units still retained The Pickelhaube Helmet until 1917-1918). 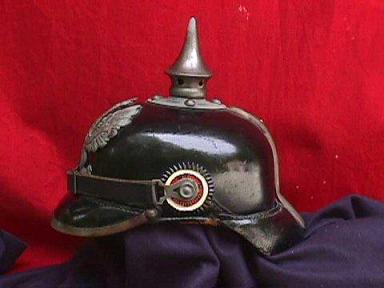