Like the well known "Panzerfaust", The Panzerschreck was a hand-held, multi-purpose, Anti-Armor  (Tank) Rocket Launcher. Used by The German Army in World War II, it fired the impressive 88mm Round, capable of penetrating up to 10-inches of Armor Plating at minimum ranges. The maximum range of The Panzerschreck was 150-yards. It's name meant "Tank Fright". The 88mm Round could achieve 260 mph in flight. A single Soldier could operate it, but often it was deployed as a Crew Serve weapon (2 Men). Due to it's highly dangerous backblast, a 2-foot Face Plate was installed to protect The Firer. Seen as more efficient than The American "Bazooka", The Panzershreck was first deployed with The Wehrmacht in 1943. Over 40,000 were produced until the end of The War (1945). 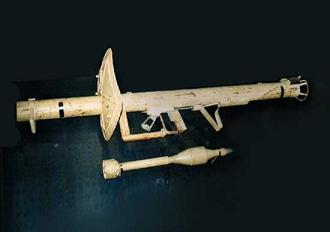