A German Infantry Classification used during World War II, The Panzergrenadier was first adopted in 1942, as a Supportive Infantry to Hitler's vaunted Panzer Armored Tanks. Different than Motorized (later Mechanized) Infantry, The Panziergrenadier too utilized armored vehicles to move int battle. However, their primary deployment was to form behind their Tanks on foot and follow them into battle. Using them partly as a form of moving cover, after an Enemy position of exposed and decreased, The Panziergrenadier Units would move in as a form of ''Shock Troops'' and destroy or capture an Enemy piecemeal.

Seen somewhat as ''Elite'' in stature, The Panzergrenadiers formed over 220 Battalions within The German Wehrmacht from 1942 until 1945. Their Force Deployment also included sub-specialties such as Anti-Tank, Anti-Aircraft, Combat Engineers and various Small Caliber Artillery Units. These were highly disciplined Units with skilled Officers to command. In today's modern German Army – the Title is still used, but is now associated with strictly Mechanized Infantry deployments and skill sets. Panzergrenadiers are seen as being Germany's Military Elite with regards to future Urban Warfare for which they are seen as needed. 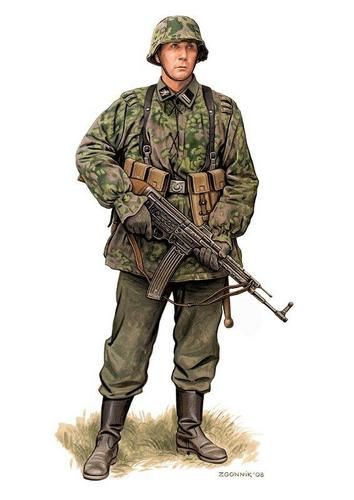