The ''Panzer Badge'' was a German Army Award issued between 1939 and 1945. A ''Chest Badge'', worn on the Left Lower Pocket of The Dress Uniform, The Panzer Badge was given to any Rank of Panzer (Tank) Crewman. Later, Panzer Grenadiers (Infantry Support) Soldiers were also authorized The Badge for wear.

A Silver and Bronze Version were produced, with Award increments of 25, 50, 75 and 100 Combat Action in which a particular Crew fought. Silver was the highest Award at 100 Actions. Field Grade Panzer Officers were also allowed to wear The Badge. Over 35,000 Panzer Badges were awarded.

Designed as an Oval Device of a Wreath, The German Eagle was placed at The Top (holding The Swastika Insignia). Centered, was the profile of a German Tank (forward Facing). While all former German National Socialist Awards and Medals were banned after The War in 1945, The Panzer Badge was the only exemption. ''new'' Versions were manufactured (1957) without The Swastika Insignia. Worn in the same fashion of The Uniform, in the 1960s, a small insignia version was mounted on Gray Ribbons (as an Award), and issued to Soldiers who completed Armor (Tank) School in The German Army. 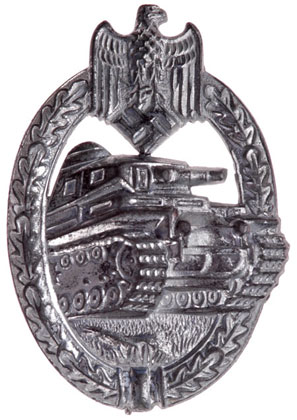