The Nazi Party of Germany developed a replacement for The old German War Flag, used by Imperial Germany in World War One. As a "War Flag", it was to be carried by combat units as a way of instilling morale. First seen during The Invasion of Poland in 1939, the Flag was a Red Field in entirety. A large Black Nordic Cross, trimmed in White, quartered the Flag. In the off center of The Cross, was The NSDAP symbol - The Swastika. In the Upper Left Quartered "Canton", was a Red Field again, with The German Maltese Cross in Black. The War Flag was used by many Panzer (Armored) Units and was adopted in part by The Navy as it's unofficial Ensign. Like the rest of The Nazi Party Flags, it too lasted until 1945 and Germany's defeat. 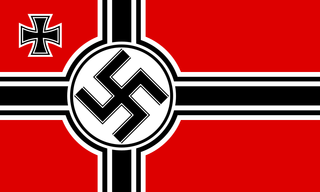