Another iconic weapon of Germany's in World War II, was The Maschonepistole 40 (more commonly, The MP 40 Sub-Machine Gun). Designed by Heidrick Vollmer in 1938, full production did not go into effect until 1940. The MP-40 is often misidentified as "The Schmeisser" (especially by Allied Troops). Although Hugo Schmeisser was a German firearms manufacturer, he had nothing to do with Vollmer's design (his design was a full stock version called The MP-41).

The MP-40 was a steel framed, sub-automatic weapon with an attached, side folding rear stock (also of metal). Over 1 million models were produced between 1940 to 1945. The MP-40 was 9-pounds and 33-inches in length. It was chambered for a 9mm round, held in either a 32-round, straight magazine (most used) and a 64-round drum. Capable of 500 rounds per minute, it had a minimum effective rate of 100 meters (with a maximum of 200).

The MP-40 was a popular weapon with German Paratroopers and the infamous Waffen SS. In Frontline Regular Army Units, The MP-40 was popular with Squad NCOs (much as the US M-1 carbine was for their counterparts). A common problem with the weapon involved it's high cyclic rate of fire. A design flaw with the magazine feed caused jamming issues. Even to the common temptation by Users to grasp the magazine as a firing grip, caused feed problems. Soldiers had to be specially trained to overcome this habit.

Dirt and debris was exposure to excessive dirt and debris (both of which would cause jamming and misfeeds of the weapon). There were three variants to The MP-40, before production stopped at War's end. Design variants would continue in many European Nations, with The MP-40 even being seen in use as late as the mid-1960s in Southeast Asia. 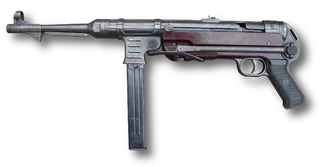