The World's first operational Fighter to use Turbo "Jet" technology, The Me 262 (sometimes referred to as The "Schwalbe" or "Swallow"), is regarded as one of the most controversial "What If" weapons created by Nazi Germany. First experimentation with Jet Engines on Germany started in 1938, with the first prototype Me 262 flying in 1940.  Throughout it's production "life" no less than 30 variants were designed  (or theorized). 1,400 of "Hitler's Jets" were built, but only 200 were actually deployed. Had it not been for Hitler's constant interference with The Project (he wanted a Jet Bomber), coupled with consistent Allied bombings of Germany Military assets AND critical shortages in fuel - slowed full deployment.

The Me 262 Fighter used twin, under carriage turbines (BMW/Juno 0098s). This allowed The Me 262 an airspeed of 540 mph (superior to any Allied prop driven Fighter). Several experiments with both "Swept wing" and "straight wing" configurations were built. A single and twin seater Fighter, The Me 262 was 34 feet long with a wingspan of 40 feet.
The Men 262 was seen as a counter to the Allied "high altitude" Bomber, The B-29 "Super Fortress", it was armed with (4) Mark 108 37mm Cannon, placed on the aircraft nose Cone (front).

In addition, it was capable of carrying 1,100 pounds of munitions. It had an operational ceiling of over 38,000 feet, with a rate of climbing of 3,900 feet per minute.Several technical issues were apparent. First, finding adequate Fighter Pilots capable of the physical rigors of being a "Jet Pilot". Also, control of the aircraft during deployment of it's nose Cannon was problematic. In combat, it mostly won every sortie it engaged in. Often, Allied Fighters would have to "Pack Attack" in multiple groups to take them down. With examples captured, The Allies used this technology to advance Jet technology for their own assets. 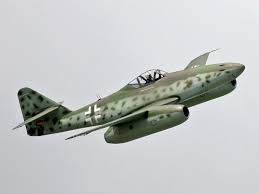