Another of Hitler's "Super Weapons", The Me 163 was the World's first rocket powered Fighter aircraft. Design prototypes began in 1941. Production delays and interference caused the so named "Komet", to be finalized and combat deployed in 1944. Capable of the unheard of air speed of 700 moh, it had a lift rate of 15,000 feet in several minutes! The Me 163 was designed to be an Interceptor. It was 30 feet long with a 30 foot Swept wing configuration.

A single-seat Fighter, it was armed with twin Mark 108 37mm wing fixed Cannon. Utilizing a T-Stoll Chemical Rocket which used compressed hydrogen peroxide , injected with water - The "Komet" was obviously difficult to control during ascent. It had 9 confirmed "kills" in air combat during 1944-1945. Over 300 were built  (but these numbers were never deployed in great use over Berlin).  Many were captured by the Allies and as, with The Messerschmitt 262, went to be be used to further their jet and rocket research. 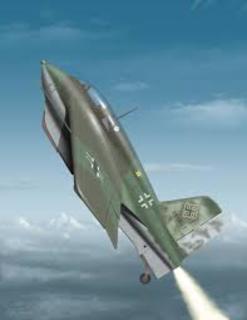