Developed and used between 1943 and 1945 by Germany's Kriegsmarine (Navy), The “Neger'' was based on The G7 Torpedo (Housing). Much like Britain's “Chariot” Manned Torpedo Sleds, The ''Neger'' was deployed against The Allied Invasion Fleet at Normandy (1944). (24) such Devices were launched, with (2) British Minesweepers being sunk by direct action. Only (9) returned from this operation. (200) ''Neger” Devices were produced. The single Pilot was placed in a sitting position (cramped), into the main Chassis of The ''Neger''.

A single screw propulsion system and steering column provided mobility. Typically, The “Neger” operated in 30-feet of water. Below the fuselage, a 21-Inch Torpedo was attached. Electrically armed and activated, ideally the Pilot and his “Ship” would survive (but many did not). The ''Neger'' could achieve 6-mph in open Seas. Several other British Destroyers were “claimed” by The ''Neger” Devices, but these sinkings have always been brought into question. Air Supply was rated at 8-hours. Of the 200 Devices deployed, 125 were lost. 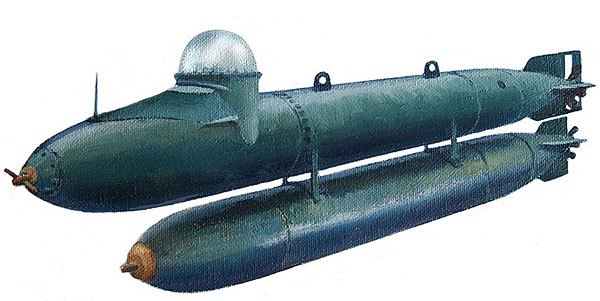