Another iconic piece of weaponry from World War I was The Luger series of pistols. Durable and reliable, they were first designed for The Imperial German Army in 1904 by Georg Luger. With some minor variations, it was the primary issued side arm of the Army from 1904 until the end of the War in 1918. Weighing almost 2-pounds, The Luger came in a 3 and 7-inch barrel design. It fired 2 types of round. A standard 7.65mm (similar to a .22 caliber) and a heavier .45 caliber (although most were in the lesser). A top cocking lever activated a standard spring fed magazine of 8-rounds (with a 32.round Snail Drum attachment in development). The Luger at a 400 yard maximum effective range at 1,300 feet per second. The initial 1917 Model would be produced until 1942 (when other variation of The Luger would be produced). Lugars are still produced for many European Countries (Military and Police). 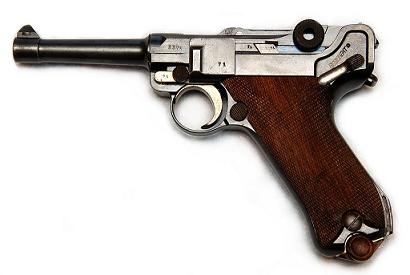