Another proposed “Wonder Weapon” theorized by Nazi Germany in World War II, was The Landskreuzer P-1500 “Monster” Self-Propelled Gun. Comparable to The “Rattle” Super Tank, this was to have been a massive piece of Artillery, with an 8 to 10-mile effective range. The “Monster” was proposed to have been over 400-feet long, and moved by 4 dual Tractor Treads (with each tread featuring 2 tracks) or future Models featuring twin treads. It was designed to be 60-feet in width and crewed by 100 Men. The “Monster” would have fired the 800mm Shell. Propulsion was to be from (4) U-Boat Diesel Engines capable of 2,600-HP. Future Models (based on then current German armament), envisioned a 7-Ton Shell capable of ranges up to 23-miles. Planes were well on their way until the Project was cancelled in 1943 by Reichminister Albert Speer. 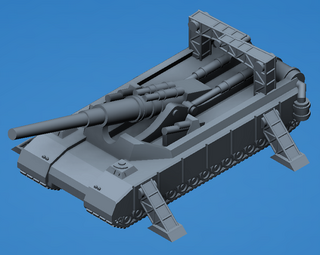