Part of Hitler's ''Wunderwaffe'' (Miracle Weapons) Program, The Kugelpanzer was perhaps the most unique and still mysterious. In essence, the device is a completely spherical steel ball, supported by thin rubberized metal tracks on the exterior ports (left and right). The device allowed a single Tanker (Crewman) to enter via a hatch and sit in a gyro-stabilized seat. This allowed The ''Ball'' to twist and turn in any direction while the Driver remained facing front.

Possibly developed in 1938 (with only several working prototypes made), The Kugelpanzer was envisioned to lay communication cable under fire and serve as a reconnaissance vehicle. It is unclear if the weapon was ever meant to feature anti-personnel defense (Guns). Never used, a sole known prototype was captured by The Soviets near Berlin in 1945. It is currently in a Russian War Museum. 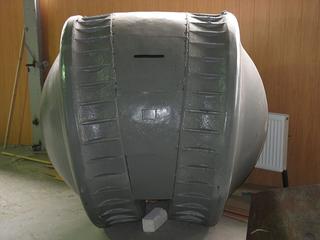