The Junkers Ju 88 Bomber was the workhorse of Germany's Luftwaffe (Air Force). Versatile as both a Day and Night Bomber, The Ju 88 could also double as a Heavy Fighter and Five Bomber. Capable of carrying up to 5,000 pounds of munitions, The Ju 88 was developed in 1936. Another of Hitler's War weapons tested during The Spanish Civil War.Over 15,000 were eventually manufactured. The Ju 88 was 36 feet long with a 65 foot wingspan. She crewed 6 men, and could achieve an airspeed of 292 mph. It also carried 6, 7.90mm Machine Gunshop  (two in the nose, one Cockpit mount, two under-carriage gondola mounted and finally twin tailguns. The Ju 88 had an operational ceiling of 19,600 feet. Effective with a 1,242 mile range, The Ju 88 could strike targets and defend itself quite well. Several variants were made, mostly improving the Bombers  payload abilities and self-defense capabilities. Production stopped with the end of The War in 1945. 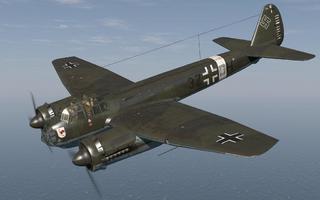