Developed late in The War (1918), The German Junkers J9 D1 was one of the first aerodynamically viable, single-winged Monoplane Fighters designed. One of the first all metal air frames produced, The Junkers was proven to withstand machine gun fire more effectively than any current Nations Fighters. A single-seater, 29 foot long plane, the Junkers had a 30 foot wingspan, and was capable of air speeds of an impressive 140 mph. It featured an operational ceiling of 27,000 feet )one of The Wars highest). However, The Imperial High Command did not approve it's deployment to The Western Front (owing much to The War's ending within months). Although never used in German combat, hundreds of Junkers were sold to Imperial Russian Forces -who deployed them very effectively against The Bolshivek Revolutions. 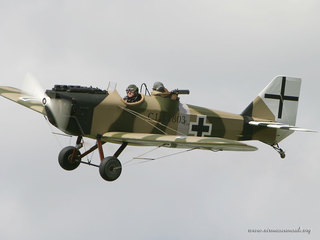