Another of Germany's "Fantasy" weapons that were actually built, The Horton Ho 229 Fighter was the World's first operational "Flying Wing". The Horten was frighteningly similar to the "modern" American B-1 Stealth Bomber of the 21st Century. First prototyped and flown as a non-powered Glider, The Horten was designed to be powered by twin Turbo Jet 004B Engines. The Fighter was a solid wing-shaped construction, featuring no traditional airframe fixtures or structures. This gave The Horten literally no air drag in flight. The Horten was 24-feet long and 55-feet wide (wing tip to wing tip).

Designed to achieve airspeeds of 620 mph, The 229 could reach an operational ceiling of 50,000 feet with a 4,300 feet per second rate of climb. It was initially construction for one Pilot. He was fitted in a then "primitive" version of pressure suit, was tethered to an oxygen supply and had access to an ejection seat for emergency exit. The amazing Horten was also unique due to it's construction. It was designed using a carbon impregnated plywood, for lightness and strength. Further, the bulk of the airframe was held together with a charcoal/sawdust "glue" compound.

The Horten was to carry up to 2,100 pounds of munitions. In addition, it mounted (2) 30 mm Cannon, Rockets and twin Machine Guns. The future designs included 'Heavy Bomber" attributes, possibly allowing for The 229 to be deployed to America. Of the three prototypes built, 2 were destroyed by Allied Bombers. One survivor was captured by American Forces. Back engineered, it was determined - had The Horten been able to master "Stealth technology", it would have been unstoppable. Plans were even in development for a Horten to deploy Germany's first Atomic Device, to be used against either London or Washington DC. 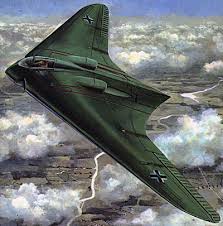