One of the most recognizable Machine Gun Models in Europe, The H&K Model 5 Machine Gun held sway between 1964 and today in some National Armies. Well over 1.5 Million have been manufactured with an incredible (44) different variations also developed. Made in West Germany, The H&K 5 was the major choice of Special Operations Groups in early Cold War Operations in Southeast Asia and The Middle East. Most National Armies (except Communist Nations), used a variation of The H&K 5. Small and light, the overall dexterity and superior small component devices were partially hand-machined. The Craftsmanship was a major requirement needed for the often “detail oriented” Missions Special Operators needed a rapid fire firearm for. The H&K 5 was also one of the first rapid fire Machine Guns to incorporate a dedicated three-round firing selection switch for The Operator.

The “standard” length for the “Battle Rifle” Version was 28-inches with a 9-inch Barrel (one of the first to incorporate a “hidden” profile via hand grips). The “Low” end weight on some Models was 3 to 4-pounds, with the “Upper” or “Heavier” Models ranging up to 12-pounds. Although the original Prototypes were Blued or Parkerized Metal, future (and the more popular Models), were designed in high-impact plastic. The Cyclic rate ranged between 700 to 900-rpm, and were controlled by an enclosed, rotating Bolt System. Chambered for the 19mm Round, The H&K 5 was re-chambered for American use with a 10mm Round and the more popular NATO 7.62mm Round. Ammunition Clips came in 15 to 60-round Stack Clips with a 100-round Drum even produced. The Machine Gun was effective to 700-yards with 250-300-yards being better suited for Clandestine Missions. Today’s variants also use various Long and Short Range Targeting and Sight Scoping. 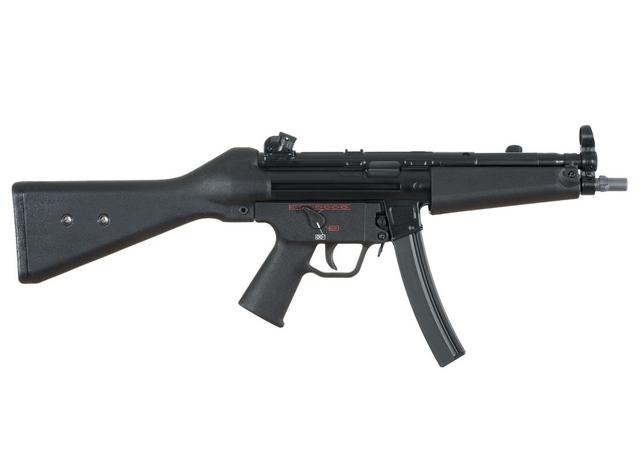