The World War II German Henschel Hs-293 was a moderately successful aircraft guided munition deployed by The Luftwaffe. It (unlike the vaunted ''Fritz X''), was designed to attack unarmored Allied Shipping. It was though used – successfully against several Warships during it's operational career. Designs began around 1940, with over 1,000 such weapons being produced between 1943 and 1945. The Hs-293, was a radio wave controlled munition which was launched from under the fuselage of a Medium to Large Bomber. It was a ''line of sight'' weapon, which meant that the guiding Plane had to maintain a level approach and keep the munition within ''sight'' (and radio signal range. Flares were used (as well as later lighting systems) to aid during night deployments.

Weighing over 2,000-pounds, The Hs-293 was 13-feet in length with a 10-foot wingspan (stabilization). It's warhead carried 650-pounds of High Explosive charge. Propulsion was via a liquid powered staged system which produced over 1,500-pounds of thrust. The weapon could range 6-miles (guided), and had an operation ceiling of 30,000-feet. Allied Forced places great efforts into jamming devices (carried by planes and warships) – which were hoped could defeat The Hs-293. It wasn't until a ''captured'' (non-detonated) device (1944), was examined – that a successful such counter-measure was developed. Nonetheless, over (15) variants were produced, with over (35) Allied Vessels either severely damaged or sunk as a result of The Hs-293. 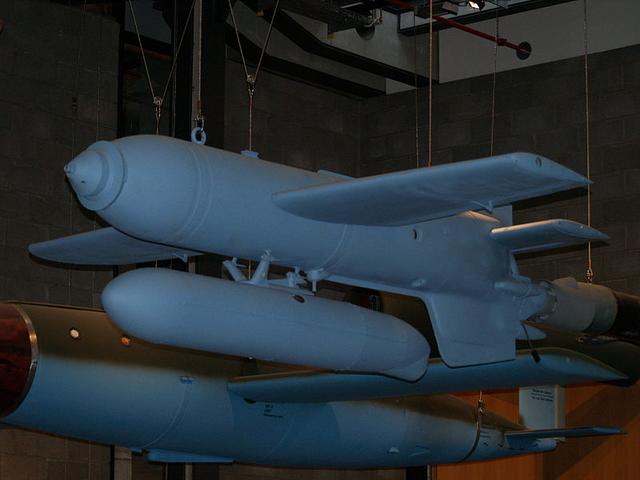