Also known as The ''Butterfly'', The German Henschel Hs-117 was Surface to Air Missile was a radio-controlled munition. While testing was successful (so much that 3,000 devices were ordered by The Army), various problems with deployment developed. Testing was more successful from Ground Based Platforms (such as Launching Pads and modified Artillery). Testing from Aircraft launched systems were a failure. Arguing between The German Army and Luftwaffe (Air Force), delayed overall production so that none were ever fielded. The He-117 over 1,300-pounds and was 8-feet in length, IT was a single staged, liquid propellant weapon, which used a variety of chemical reaction mixtures to create roughly an airspeed of over 600-mph. The operational ceiling for The Hs-117 was 30,000-feet.

As a Radio controlled weapon, a (2) Man Crew was required. One to fire and control the targeting and overall approach, and the other to serve as Observer. It is speculated that The Hs-117 may have been a ''game changing'' weapon with regards to protection over major German Cities, had it been actively deployed. 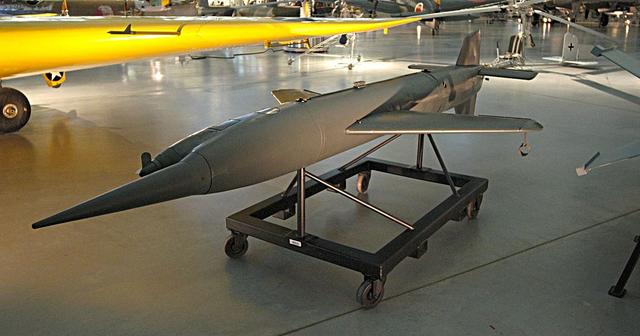