Germany's Granatwefer 42 was a World War II Close Infantry Support weapon used by German Infantry Forces beginning in 1942. Known as The GRW 42, it was a heavy weapon at 620-lbs. This required an specialized towed vehicle for transport. The GRW 42 had a 6-ft tube and was supported by a front support tripod and a support base. A crew of (4) could deploy between 8 to 10 rounds of various types, per minute. Similar to the later US 4.2-inch Mortar – The GRW 42 saw active usage until the end of The War in 1945. The maximum firing range was slightly over 3-miles. Typically a HE Shell was roughly 36-lbs. Close to 10,000 Models were produced with a staggering 5 million Shells being likewise produced for use. 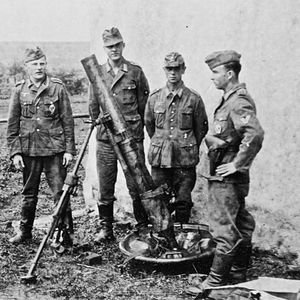