The German ''Goliath'' Mine was a remote controlled anti-tank (Armor) weapon, deployed by The German Army in World War II. The ''Goliath'' was effective and were deployed throughout Europe. Over 5,000 were produced and deployed between 1943 and 1945. The ''Goliath'' was also used by The German Army Engineer Corps. The weapon resembled a miniature Tank Chassis with twin tracks for mobility. They were remotely controlled via a command lead line. The Operator would remain safe behind cover and literally ''drive'' The Goliath towards it's intended target (Armor, reinforced emplacements or obstacle).

Protected by 1-inch of plating, ''Goliath'' contained 130-pounds of High Explosive. They could achieve 6-mph (6-HP Diesel Engine). The Command Lead Line was rated at slightly over 2,000-feet. The weapons was 5-feet long and weighed over 900-pounds. A common issue with ''Goliath'' was prolonged exposure to Artillery (if it did not destroy the device outright), caused the severing of the Command Line, rendering them inoperable. 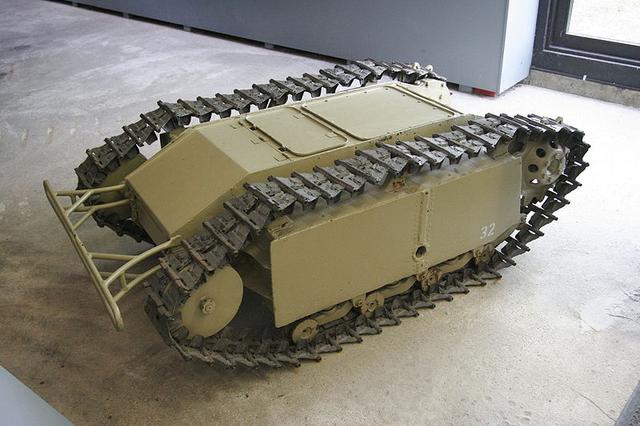