Much as with The French (and other Armies), a very real need for head protection was seen as a necessity for The German Army. The standard issue ''Picklehaube'' Helmet gave no real protection against shrapnel and related debris. Although the Stahhelm would become the dominant form of head protection with The German Army from 1915 until 1945, many  attempts were tried. The Skull Garde was one of them.

Clever in it's design, The Garde Cap was a form fitting, single piece of steel plate which was worn under a standard issued Uniform Hat (cloth or leather). It covered the entirety of the upper cranium of the head and extended slightly downwards on the sides. The front of The Garde Cap swooped down the front towards the face into a slight extension which greatly resembled The Medieval Nasal Guard Helmet of the 15th Century.

Like most early attempts, The Garde Cap, which was experimented with from 1909 until it was replaced in 1914, had many flaws with providing basic protection to the side and neck of The Wearer. With the adoption of The Stahhelm (1915) - The Garde Cap ceased to be seen in The Trenches of World War I. 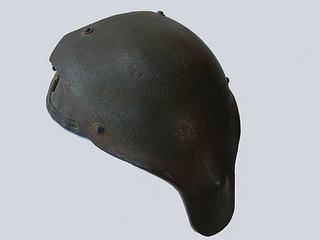