The innovative German Ta-154 ''Moskito'' was a Nocturnal Operations Light Fighter Plane designed and flown in 1943. The unique Ta-154 was built entirely from bonded plywood with an all metal reinforced Cockpit. The whole of The Fighter was coated in a polymer known as Tego Resin. This, along with it's construction made The ''Moskito'' a lighter and faster Night Operations Fighter Plane. Crewed by 2 Pilots, The Ta-154 was 40-feet long with a wingspan of 53-feet. They were powered by Twin Junker Jumo 213E Engines, which were liquid cooled. Each could achieve over 1,300-HP. The Ta-154 could maintain an airspeed of 400-mph with a 35,000-foot operational ceiling. Armament included Twin 20mm Wing Cannon and Twin 30mm Nose Cannon. A later variant included a package which had a single fuselage mounted 20mm Cannon, in addition. The Ta-154 was never envisioned as a tactical light bomber.

The ''Moskito'' deployed with a highly sophisticated avionics package. Radar systems, ''Laser'' (light refractionary) gun sighting, advanced radio communications (anti-jamming), and several other innovations, made The Ta-154 a possible ''game changer'' in The German Luftwaffe attempts to re-gain air superiority over Germany. While prototypes performed well, actual production Models suffered in actual combat. Close quartering turning rations in air combat were slowed, with Pilots blaming the ''heavy'' metal Cockpits. As many as 25 were produced with a very low rate of Allied destruction. However, the Luftwaffe changed design plans and began to divert funding to more productive Fighters and projects. The Ta-154 Program stalled in early 1944, and was not developed further. 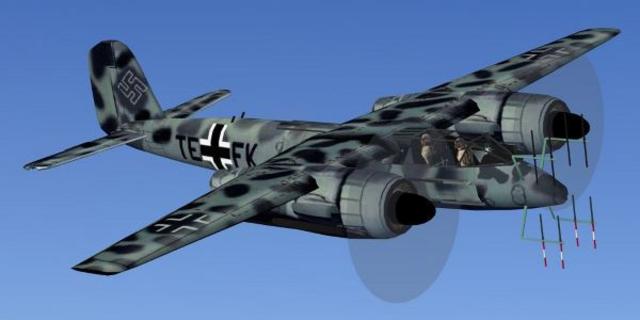