The German Folke Wulf Ta 152, nicknamed The “Hohenjager” (or “High Altitude Fighter”) was a late World War II Production Fighter, designed to be able to be flown high above Allied Bomber Squadrons attacking The German Fatherland. It was envisioned to be able to fly over flight of Bombers at an operational ceiling of 50,000-feet. This was done by a series of Nitrous Oxide Tanks (known as GM-1 Devices), which would give the Fighter a form of crude “rocket powered” boosting.

(8) prototypes were attempted (with the 8[sup]th[/sup] being the only Produced). Of these 43 Models (in late 1945) – their use in Combat proved “too little, too late” to make any marked difference in Germany’s outcome in World War II. The Imperial Japanese secured a prototype in 1945 as well, but their attempts to produce a viable Fighter ended in August of 1945. 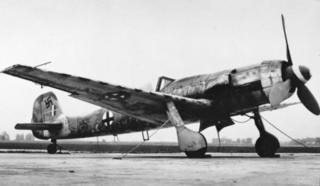