A ''Gyrodyne'' was a type of Aircraft with combined Helicopter (Rotor) with conventional (Prop) driven Aircraft. With the ''theory'' was experimented in Countries such as Britain and France (and to a small part The US), it was The German Flettner Company who began to experiment with a version of Gyrodyne for Military usage. Their prototype was called The Flettner Fl-185. Piloted by (1), the prototype measured 35-feet in length and was 5-feet in width. The primary Rotor Blade (Top) had a radius of 40-feet. The Front propellers were wooden and ''pitch synched'' (Metal versions were to be produced later).

Powered by a single Bramo 314C 7-Cylinder Engine, 150-HP was achieved. The prototype achieved several hundred feet in hover. First flown for The German Government in 1939, they were not altogether too interested in The Flettener. The Company had hoped that it would be adopted into The Navy as a Ship Launched Reconnaissance and Army Observation platform. Later, in 1944-45, Versions of The Flettner would in fact be developed and used by The Kreigsmarine in pretty much the fashion envisioned by The Flettner Company. The prototype did not survive The War. 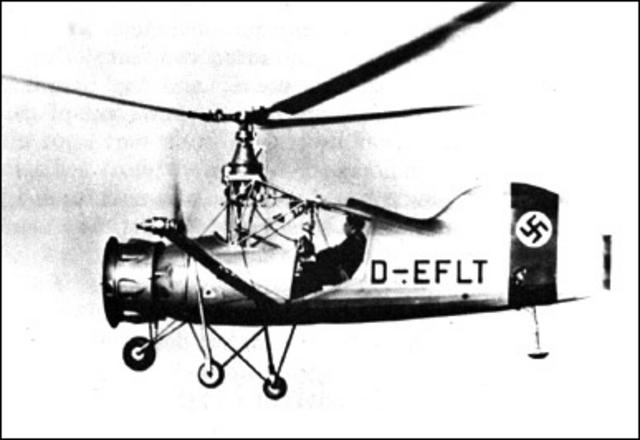