In a desperate attempt to curb Allied Bombing of Germany, The Third Reich began to develop “suicide weapons” in late 1944. One of the devices invented was The Flying Bomb known as The Fieseler Fi 103R or “Reichenberg”. These were modified V1 & V-2 Class Rockets (which had some success in attacking both France and England).

The FI 103R (of which there were 5 known variants), was a 27-foot Rocket with attached wings measuring 18-feet. Powered by a Argus 14 “Pulse Jet”, it could achieve 500-mph at maximum trajectory. The FI 103R had an operational range of 300-miles. The bulk of The Rocket had approximately 2,000-pounds of high explosive.

A small and cramped “cockpit” was created inside The Rocket fuselage, which allowed for a single Pilot (in a prone position), to (using simple steerage and wing adjustment equipment) – to guide The Rocket to it’s target. Later versions were developed to be controlled very much as a traditional Aircraft.

With 175 built, a special Luftwaffe Squadron was created known as “The Leonidas Squadron”. These were Volunteers who full well understood that their Mission was “one way”. It was considered an “honor” to join. However, Teutonic Military Tradition was against suicide by way of Combat (even if for National interest). By March of 1945, The FI 103 R shelved without ever being used in combat. 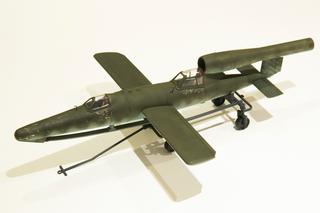