Produced in experimental numbers by Germany in 1944, The Einstossflammenwefer 46 was a hand-held flame projecting device, envisioned for use by both Infantry and specialized Forces of The German Army (Paratroopers, Grenadiers etc.) Cheap and easy to make from aluminum, the E-46 was used much as a hand-held rifle. Using pressurized gas which was ignited by a trigger activated sparking system located by the barrel. The flame ''blast'' was measured to 90-feet during trials. Of the few Models that were deployed late in the War, they were effective. 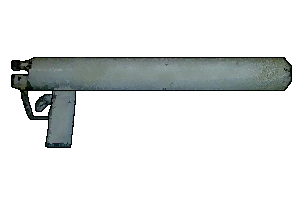