Formed late in World War I (1917), The Imperial German Army's ''Eingreif Divisions'' was a type of ''Shock Troops'' used as Counter-Attack Forces (mostly in Trench Warfare). These soldiers also modified the existing Trench Systems to allow them to flank their Enemies during charges. Heavily supported by Artillery, The Eingreif Divisions main goal was ''never'' to give up their positions. Rather a ''To The Death'' mentality and ethos was created.

An example to their ''doggedness'' was seen as The Battle of Ypres (1917), when Eingreif Division inflicted over 70% casualties against The British Forces there. Many Eingreif Division were also positioned along The famed ''Hindenburg Line'' (defensive positions and fortifications built along The Western Front.

Although uniformed in the same manner as The Imperial Army, most Eingreif modified their uniforms to make them lighter with greater mobility. These were ''Prussian Grey'' with the recently adopted Stalhhelm (Helmet). Typically they carried two Rifles and often handguns, trench knifes and of course grenades.

However, with rapid developments in Armor (Tanks) and Aircraft (early Ground Support Bombers), The Eingreif Division began to lose ground due to heavy casualties (most of whom could not be replaced). Much of their assault and holding tactics would be overlooked by the later Third Reich (whose Military favored the fast ''lightning assault'' and Armor deployment). 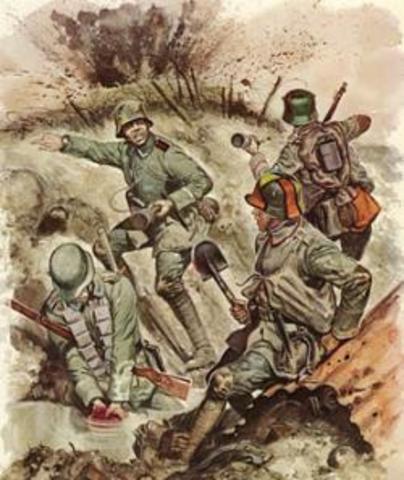