Also called The “Pfiel” - The Dornier Do335 ''Arrow” was based on their successful late World War I and after “Tandem Engine” Aircraft. Engines were mounted in the Front and Rear Fuselage – of which propellers were likewise placed. The Rear Engine and Propeller actually could increase performance and speed. Many Countries experimented with The “Tandem” Designs – but Germany was the only Country able create a “Fighter” Version. The German Luftwaffe wanted very much to produce and deploy Tandem Fighters (seen as more effective over “Emergency Fighters” or the few and far between “Jet and Rocket” Interceptors. (37) Do 335s were produced, with at least (16) that were known to deploy in Air Combat. Their numbers were too few and too late in The War to make any real change in favor of Germany. Only (1) complete Dornier Do335 is known to still exist.

The Do335 was Piloted by 1. They were 45-feet long with a wingspan of 45-feet. The Do335 was powered by Twin 12-cylinder Engines, capable of 1,750-HP each. The “Arrow” could achieve 475-mph and operate at a maximum operational ceiling of 37,500-feet. Armament varied. A standard deployment package was (1) 30mm Cannon and (2) Cowl Mounted 20mm Cannon. Ordnance packages rate The Do335 at 1,000-Pounds. Captured (non-existent) versions were taken to American and Britain who both experimented with The unique Dornier Tandem design, but The “Age of The Jet” was firmly underway. 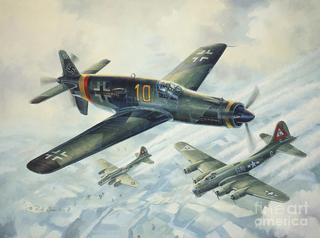