The German ''Blutorden'' (or ''Blood Order'') was a highly coveted Political award of The Nazi Party. It was created in 1934 in commemoration of The Party's 1923 ''Munich Putsch'' (aka ''The Beer Hall Coup''). It was given to those Supporters of Adolph Hitler who marched with The Nazi Party in Munich. The ''Blood Order'' was also worn on various High Ranking German Officer's uniforms – throughout World War II. The Medal was made from pure Silver (circular in pattern). The Front bears the image of The German Eagle, perched over a solid Wreath. The inscription reads ''NOVEMBER 9, 1923 – MUNICH'' .The Rear of The Medal featured the facade of The Feldernhalle Building in Munich, which was a commemoration monument build to The Bavarian Army (1841). A Party Swastika is placed over The Building. The Ribbon was bright Red with Silver and Black Striped edging. It was the 5th most important Nazi Party Political Medal Awarded to Party Members. 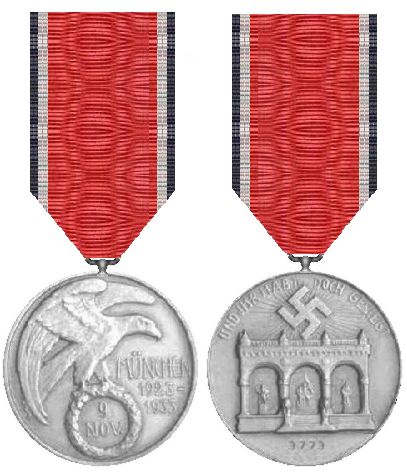