Germany successfully developed and deployed many prototype Jet and Rocket-based Aircraft towards the end of World War II. Lack of consistent War Materials and an ever pressing Allied assault on all Fronts, greatly diminished Germany’s ability to effectively use these revolutionary designs to it’s end of winning The War. In the design and deployment of such Rocket Planes, Germany attempted to combine both Jet and Rocket into a prototype called The “Natter” or “Snake”. It was called The Bachem  BA 349. In short, it was a "manned" Surface to Air Missile.

In essence The 349 was a giant, solid fueled Rocket in which a single Pilot could “guide” into Squadrons of Allied Bombers. Upon making initial contact, The Pilot would be able to deploy a myriad of Rockets and “Rocket” Shells – assumedly destroying whole Squadrons before they could bomb Berlin and other important German Cities.

Invented by known Rocket Designer and Pioneer Erich Bachem, the first prototype was tested in 1944. The 349 was a 19-foot tall Tube with 13-foot “wings” which (as it’s stabilizers) – could be steered and controlled by The Pilot. Using Walter Bi-Rocket Fuel, (4) solid Boosters provided between 1,100 to 1,200-pounds of lift. The 349 was launched vertically. This eliminated the need for a traditional (and long) runway for launching. Pads for such, were located through Germany (mostly in Forest clearings).

When launched, The 349 would achieve 40,000-feet at 600-mph. They had a 40-mile operational range. The weapons systems included (24) 73mm Rockets or (33) “Rocket” propelled Shells from a Launcher. It also supported twin 30mm Cannon. The deployment made The 349 a “one use” weapon. The Rocket components could break up into pieces, with the primary Cockpit (with The Pilot), designed to be steered “safely” to an altitude from which “he” could “jump” and deploy his personal parachute. The first prototype exploded in-flight with the death of it’s first Test Pilot. Regardless, Germany developed several 349s for deployment – but the War ended without further use. 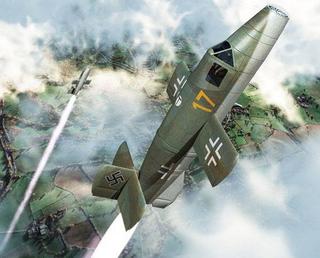