The German Arado Aircraft Company approached Hitler's Luftwaffe Command in 1942 with a proposed ''rival'' to the widely speculated and secret project The ''Amerika Bomber''. Hitler advanced plans to create an Air Fleet of long range bombers to be used to attack The United States of America. At first plans centered around The German Kreigsmarine (Navy), and the development of Aircraft Carriers. These plans would continue throughout The War (with very little advancement). The Aradp Company proposed The E-555. This was part of their ''X-Plane Plan''. These theoretical aircraft were to be designed to give The Luftwaffe worldwide strike capabilities. Neither The United States nor other Allied Countries had any counters had Hitler pushed the Plans through with any great fervor.

The E-555 was envisioned to be a revolutionary design. A Bi-fin designed aircraft, early design models placed engines on top of the fuselage of the rear aircraft (to focus thrust). Crewed by 2 to 3 Airmen, The E-555 was structurally designed to support over 13,000-pounds of ordnance. It was to be roughly 85-feet in length with 30-foot wings. (4) BMW Turbojets (on the first model), would create over 7,000-HP each Unit. Ten variants were proposed of various design types (mostly engine modifications). A wind test model was used in 1942, but Hitler soon canceled The Arado Plan in favor of The Amerika Bomber (which as it's Arado rival – was also never made). 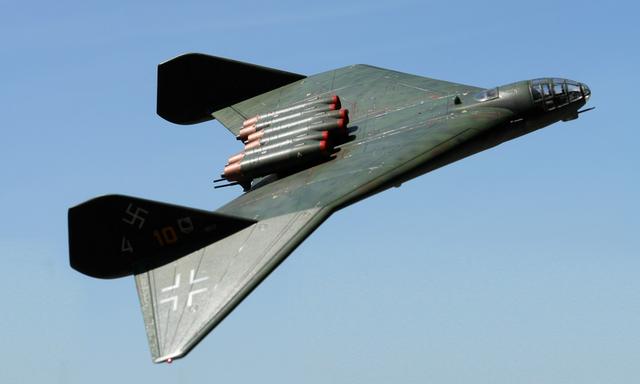