Touted by many Historians as The World's first Jet Bomber, The German Arado Ar-234 was first designed and flown in 1943. The German Luftwaffe ordered over 200 production Models for deployment during the last year of World War II. The last German Fighter over Great Britain in April of 1945, was a Arado 234. Crewed by (1), The Ar-234 was 42-feet long with a 40-foot wingspan. In addition to Twin Walter HWK Flow Turbojet Engines (1,990-HP), a set of Twin JATO Rockets were attached on the fuselage with over 1,000 pounds of thrust. These were one time, speed increase Units that could created close to 500-mph in airspeed. The Arado 234 had a range of 900-miles with a 20,000-foot operational ceiling. Over 3,000-pounds of munitions could be carried and deployed. Aircraft defensive measures included (2) 20mm Cannon (Pilot operated).

The overall goal of The Arado 234 was to be used in Night Bombing Missions, by creating whole Air Squadrons which could attack, return to Bases (reload) and fly again in ''record speed''. However, increased Allied Bombing of German Luftwaffe Air Fields and Arado Production Factories, drove much of production literally underground (in specially designed below earth production factories). So effective with continual (Day and Night) Bombing, wide scale benefits that The Arado 234 could have provided were greatly decreased. Several Models have survived as Museum pieces. 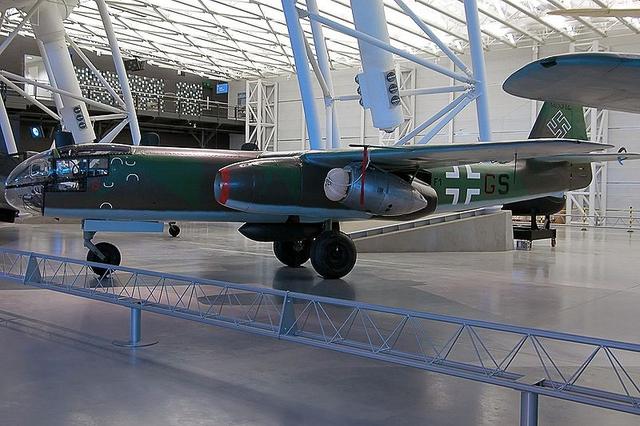