Nazi Germany attempted to build several Aircraft Carriers early in World War II. The original German Kreigsmarine (Navy) plan, was to have as many as 4 "Graf Zeppelin"-Class Aircraft Carriers, starting in 1936. However, "in-fighting" between The Kreigsmarine and German Luftwaffe (Air Force) over weapons development, made such plans difficult to present to Germany's Leader Adolf Hitler. He placed more emphasis in his Air Superiority than The Naval assets (although he did allocate resources for The U-Boat Program). Adapting design ideas from both American and Japanese Carrier designs, the proposed German Carriers would be designed much different. The Kreigsmarine saw their potential Carriers as assets for the newly proposed (and prototyped), Jet Fighters in late 1943-44.

Germany managed to produce only 1 Aircraft Carrier, almost complete. The namesake of The Class, The "Graf Zeppelin", was a 34,000-ton displaced, 821-foot vessel. She stood roughly 103-feet tall in the water. Her Geared Turbine Engines could produce over 200,000 HP, allowing her to achieve and easy 35-knots in open Sea. She also was to gave a proposed 8,000-mile operational range for relative "long range" Ariel Operations.

The "Graf Zeppelin" was slated to crew over 1,700 men, with an attached Air Crew of over 300. Her armament was impressive for a Carrier. She carried (16) 15cm Main Guns, (12) 10.5mm Anti-Aircraft Guns, (22) 37mm Auto-Cannon and (28) 20mm Auto-Guns. She would have carried 43 Aircraft, with The Messerschmitt Bf 109 selected as the primary Fighter Type. "Graf Zeppelin" would have also carried several Medium-Range Bomber Types and Reconnaissance Aircraft. Later plans to extend her Flight Deck was for the "future" Me 262 Jet Fighter.

90% completed  by 1945,  "Graf Zeppelin" was Ported in numerous Baltic Countries under German control, until she ended up in Poland. She was scuttled in Harbor when The approaching Soviet Army was reported near, to prevent her falling into their hands. Soviet Engineer raised and re-floated her, using her for target practice, re-sinking her in 1947. The submerged wreck of "Graf Zeppelin" was discovered in 2006. 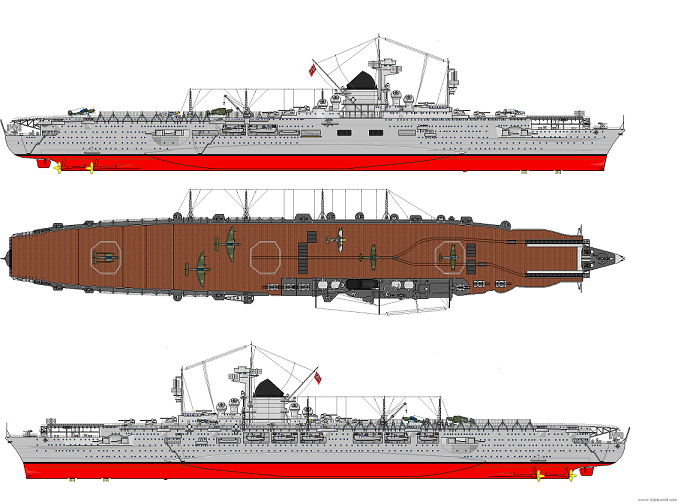