The Ahnenpass was a document created by The German National Socialist Democratic Party (NSDAP) in 1933, which was a direct result from Germany's development of ''National Purity Laws'' (Nuremburg Laws). Germany had begun to develop pseudo-science to promote the theory of ''Aryan' or Master Race Class establishment for the German People. Wgile much of this research was proven false (even at the time), most Germans still believed it (or were afraid to challenge The Party).

A German Citizen who wished to work in Government endeavors, had to establish that they were, in fact ''pure'' Germanic or Aryan (Blood Law). Local verification of established family lineage as well as demonstrated physical examination (Doctor).

All results of these ''tests'' were kept in a small Red booklet, which was carried at all times by a Citizen. The document was not considered a Public Record (officially), but they were required of a Person who wished to work in specific Military or Government position. 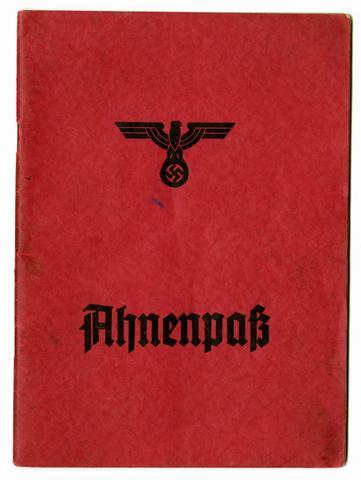