The massive ''Karl Gerat'' (or ''Great Karl''), was a self-propelled Siege Mortar deployed by Germany during World War II. Only (6) of these Mortars were produced and deployed. The Program for deployment was considered a massive undertaking which provided for many hundreds of soldiers and additional materials, just to transport and operate the weapon. The Mortar was designed and built by The Rheinmetall Munitions Company. Transported by railway (much as the Krupp Series of Guns), The Karl Gerat weighed some 137-Tons. When it was removed from it's railway it operated on twin massive tracks. It could achieve 3-mph on flat land. Propulsion was supplied by (2) Engines (one Diesel and the other gasoline). The combination of the two allowed for over 500 HP.

The Main Barrel of The Karl was 15-feet long with a 24-inch barrel diameter. This allowed for the firing of a 2-Ton Shell. Due to various Shell types, The Mortar could fire a Shell from 4,000 to 11,000-yards.It took a primary Crew of 21 to operate/fire The Karl. It's massive Shells were transported via specially modified Tanks. Once alongside, a series of cranes on The Karl would pick up the Shells, which could be loaded from the outside of The Mortar. The Karl Gret series of 6 Heavy Mortars were used very effectively during The Warsaw Uprising in Poland and The Siege of Leningrad. A Karl Mortar was also. Only (4) Karl Mortars survived The War, with all becoming  Museum pieces. 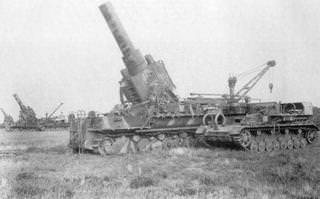