Predating Shakespeare, Geoffery Chaucer is perhaps one of the greatest Writers of his Era. His Social commentary and views of The Middle Ages have served as a “window” (of sorts) for historians throughout the following centuries. His most well known work “The Canterbury Tales” is a comedic (yet stinging) account (in allegory) of the Social Structure and “morass” of The Medieval Era. Chaucer was born in England in 1340 to a very wealthy Wine Merchant (with Royal and Noble connections). At a young age, Chaucer was taught his “Family” business.

Chaucer could care less about being a Merchant. Apprenticed to The Duke of Clarence, Chaucer served as a Page in that Househouse (1357). He was taught the “way of War”. Young Chaucer was well received and thought of (even by King Edward III0. Joining his Master in The Hundred Year War in France – Chaucer was captured and ransomed. It was King Edward that paid it. Coming back to England, he married (well). Having a talent for “observation” Chaucer began to write and publish stories about everything from “Courtly Love” to abject comedy. Often. He was requested to “read aloud” his writings to The King and Court (for their amusement). Chaucer was awarded a pension for his services. With time of his hands, he was sent on diplomatic missions for The King to Italy and France. It has been speculated that he may have even met both Petrach and Boccaccio. It was they would may have turned Chaucer towards Dante and his writings.

By 1370, Chaucer began to write more “socially relevant” works. Ever mindful the the power of The Church, Chaucer saw first hand the waste and excess (which would eventually lead to a Schism). A Writer in those days, HAD to be careful (excommunication was just ONE way of “silencing” a Writer”. Chaucer still had very powerful friends in Court (and elsewhere). His commentaries were well received (by and large). In 1385 (at the height of his popularity), Chaucer wrote the time honored “Canterbury Tales”. Writing in both Prose and Rhyming Coupet, it was based very “loosely” on Boccaccio's “The Decameron”. Chaucer took “shots” at Church Officials and self-centered Lords (again in disguised allegory). Threatened by The Church, again it was Chaucer's “connections” that kept him “out of serious trouble”. Venerated and well thought off by both classes of Medieval Society, Geoffrey Chaucer died in London in 1400. He was afforded the honor of burial at Westminster Abbey. 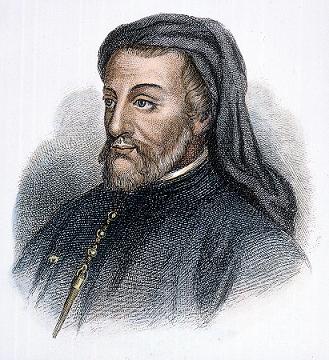