Renowned Fighters during The Middle Ages, The Crossbowmen of The Republic of Genoa – gained great prominence as skilled Fighters. They primarily used The Crossbow as their weapon of choice. They were deployed by The Genoese Navy for Ship to Ship fighting as well. They were recruited from the Sons of Genoese Nobility. In addition to their Crossbow's, they carried small Daggers. They use The Pavise Shield and wore light Armor components. Gaining their reputation when Genoa sent them as part of their detachment to Jerusalem during The First and Third Crusades. So effective with their Crossbow's that when captured, their fingers were often cut off to ensure they would not be able to fire them again.

The “swansong” of The Crossbowmen as when they were recruited by The French as Mercenaries. They were deployed against The English during The Hundred Year War. At The Battle of Crecy (1346), 5,000 were deployed. A severe rainstorm arrived caused damaged to their Crossbows (whereas unlike their English counterpart – The Longbowsmen, they could not remove their Bow Strings to keep dry). Unable to fire. They came under an onslaught of English Arrow fire which caused their retreat. The French Knights, angered by this act of what they perceived as “cowardice” - began to cut them down themselves. Although this incident somewhat marred their reputation, The Genoese went back to The Republic and became more traditional Mercenaries, now using early Firearms in place of their Crossbow. 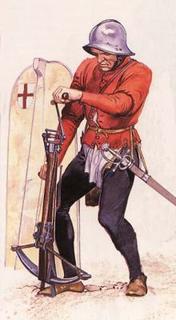