First seen in 1776 and in used until disbanded in 1783, General George Washington of The Continental Army (as did many Field Grade Officers), had their own personal military Guard. Tasked with the protection of the Commanding Generals property (and his personal protection in the field) – such was a very common practice on both sides of The Revolutionary War. Raised mostly from Massachusetts Colonists, The Guard was identified by their own unique colors (flag). A field of white which featured “Liberty” (as a woman) with a Colonial Officer and horse (thought to be a representation of Washington himself). Above the figures was a banner scroll which read “CONQUER OR DIE”. The actual flag is long lost and the first visual representation (and illustration of the flag was seen in 1852). There have been many reproductions made (based on this). 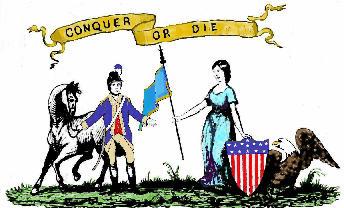