The infamous ''General Order No. 28'' was written and authorized by Union army Commander Benjamin Butler. Having captured The Confederate City and Port of New Orleans fairly early in The American Civil War (1862), The City was garrisoned by Union Soldiers (with The Navy occupying The Harbor). With many thousands of Troops of all Ranks, it was obvious that ranker would be fresh in the hearts and minds of New Orleans Residents. ''Yankees'' seen on every major thoroughfare and alley (an in quite a few Public Houses as well), did not sit well. Most gave in to their occupation with a stoicism while other were outright rebellious. The hurling of insults and on many occasions – trash and excrement from 2nd Floor Houses, which lined many of The Rues (Streets), became a common (and hazardous) venture to avoid by most Union Soldiers. In addition, although outlawed – many off duty soldiers made ample use of the more ''adult entertainment'' that The City offered.

The throwing of trash and muck became too much for General Butler. In order to establish His own ''regulations against insult'' to Officers and Men of The United States Army, He posted a General Field Order. Simply, The Order established any ''Female who behaved as such towards Union Officers and Men would be seen as and treated as Prostitutes – or as Butler put it, ''Ladies of The Evening plying their Vocation''.

The American South put great emphasis on it's Women. Seen as ''pristine, virginal and above reproach'', the general mentality was very similar to the Medieval sense of Honor and The Code applied to Knights to their Maidens. Butler ''Order'' was immediately met with outrage and condemnation. His name became well known throughout the rest of The South as a result – ''Beast'' Butler Notwithstanding, Butler did NOT rescind His Order, which would remain in effect even when He was reassigned. Oddly, despite the treats by The Men of New Orleans to begin ''open attacks'' against Union Soldiers, Butler's Order did stop the wholesale insults and garbage throwing. 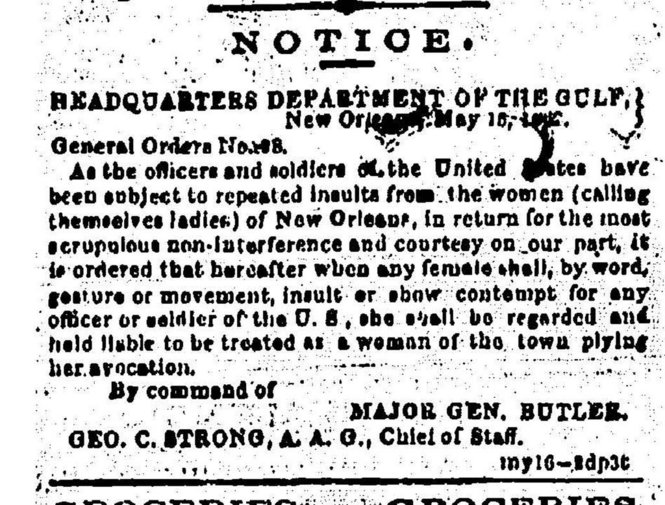