Known as The “Belly Bow”, The Gastraphetes was a large, one-man ranged arrow weapon used in The Greek Army around the 4th BC. Akin to the later Crossbow, The Gastraphetes was made of wood and was around 4 to 5-feet in length. It used a powerful drawstring with what has been estimated as a 30-pound pull. So powerful, the loading of the weapon required a downward positioning of the weapon and a “determined” pulling of the drawstring rearward. A brass lock catch would lock the drawstring in it’s firing position. To facilitate the draw, a specially carved curved rear stock, which fit into and under the abdomen of the Shooter was built – hence the moniker of The “Belly Bow”. Once properly activated, The Gastraphetes was said to have up to a 200-yard effective range. They could also be used as flamed assault weapons. The Gastraphetes thus made every Soldier a “potential” Siege Weapon. The device was known to have been carried and used by The Armies of Alexander The Great. Some examples of The Gastraphetes were also adopted in the early Ancient Roman Army. 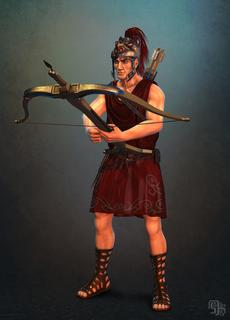