These locations (inside a Castle Keep, usually) – were first attempts to create a central form of sewage. People in Castles obviously needed to “heed the call of Nature”. The Garderobe was designed for this purpose. Originally a small closeted room, it could either have a solid door or heavy drape to cover it's doorway. A carved concrete “bench” was erected on one side. The top of the solid bench had a hole cut through (which lead to a “sluy drop”), often many floors down. This opened into a larger room or “catch” on the ground level. A person would sit on the bench to relive himself of fecal matter. It would drop and catch at the bottom. Liquid waste was removed this way as well. Naturally, “someone” within The Keep was tasked with the cleaning and removal of the “Royal Waste”. Waste, known as Gong (as it was for Farm Animals as well), was gathered and taken away (often to be used as crude fertilizer). In most cases, it was taken to a point outside the Castle called a Cess Pit (or Pool) – and dumped with other organic waste. Due to the lack of running water and piping, The Garderobe was often NOT cleaned out as often as it should have been (leading to rats and disease). As far as cleanliness, cloth or rags were used to “clean one's self”, or a simple bath was employed. Some rare examples of Medieval Castles and Manor Houses in Europe, experimented with a crude form of plumbing (which included stone pipes). Although “flushing toilets” were WELL into the future – it was still an attempt at keeping The Garderobe clean. 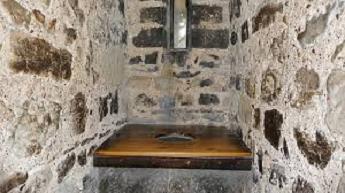 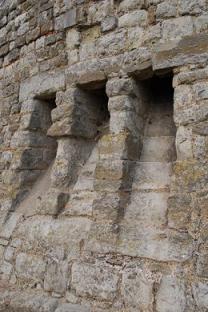