Also known as The ''Scottish Guard'', this was Protective Unit of The King of France (Charles VII), around 1418. The Unit was recruited from Scotland. The Members were all said to be Sons of various Scottish Nobility, which was seen as a major requirement for being chosen. Originally a Company of 24, by 1490 their number would swell to 75 Guards with a detachment of 100 Archers (also specially chosen). The Guards were dispatched to various internal conflicts in France, with many dying in defense of The King at The Battle of Montlhery in 1465 (The War of Public Weal). They would also evolve with The French Imperial Armies, of which they added a Dragoon Regiment in the 1780s.

The Scottish Guard would remain a fixture at The Imperial Court until 1791 with the dissolution of The Monarchy. Despite this, The 1st French Republic Army would retain the Senior Company of Guards as a Mounted Cavalry Unit 1815. The Scottish Guard were noted for their Silver plated Armor, including a Sallet Helm with long Green, Red and White Plumes. The Kings' Crown and Monogram were embellished on The Breastplate of their Armor. All Guardsmen carried both Sword and Halberd, save their Archery Company who – in addition to Bow, carried a Sword 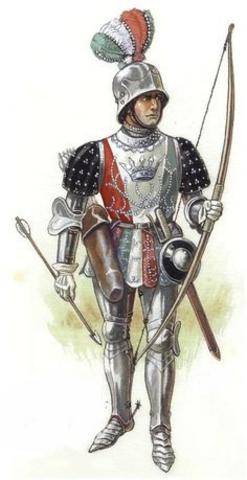