The use of Gaiters or Leggings (often confused with a similar piece of  clothing known as “Puttees”), were protective garments worn by Soldiers. Placed around the bottom of Trousers, they extended to the Lower Shin (or as high as the Upper Shin). They extended to the Ankle or could cover the Upper Foot. Originally made from cloth, later versions were constructed of heavy Linen or Canvas. A series of lacing on the sides, secured The Gaiter to the leg.

The basic use of Gaiters were designed to protect the lower leg of a Soldier from insect and reptiles, as well as from heavy brush and bush. They were used by both Infantry and Cavalry. Traced back to Ancient times, a cloth-style of bandage or straps were worn in similar fashion by Soldiers for similar reasons. In this form, The Puttee was invented. The term derived from The Hindu style of use by Regional Native Conscripts to The British Army in the 19th Century.

However, time restraints in the wearing and removal, led to more manageable versions created in France in the early 1850s. These “Gaiters” were starched White heavy Linen popularized by French Colonial Soldiers in Africa (The Zouaves). The style became adopted  by most Modern World Armies by the 1890s. The Gaiters would remarkably remain an integral part of Military Uniform wear well into the 1950s. In fact, The Gaiters led to the Civilian fashion accessory known as The Spat. The Gaiter, while not used in Modern Combat, can still be seen in many Military Parade and Ceremonial Units today. 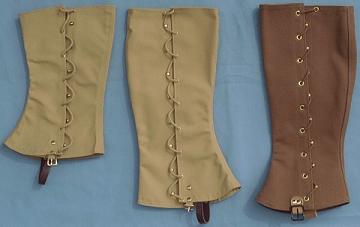