Of French origination, The Gailot was along the lines of a Barge and a Flat Bottom River Boat. Seen in the early 16th Century, these vessels were ideal for close Coastal duties as well as Channel and River works. Variations of The Galiot were also idea “fast attack” ships for Privateers and Pirates. Noted for a centralized Main Mast with a smaller Mast rearward, Gailots were of various sail designs featuring simple to moderate rigging. Versions could feature smaller “Deck Guns”. Venetian, Dutch and Lower Germanic Countries favored The Gailot for a period. From the 17th to 19th Centuries, The French Navy used The Gailot-style vessel as a “Bomb Ship” (or floating Mortar Ship, akin to a Gunboat). Variations of The Gailot were still in use in France and Venice well into the 19th and early 20th Century as fishing and light commerce ships. 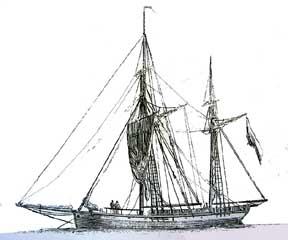