Also called “The English Hood”, it is perhaps the most recognized of Late-Middle Ages women headdresses. The Gable Hod was a “component” piece of built-up heavy linen and cloth, that created a “house-like” helmet on the head. Often described as somewhat uncomfortable to wear (and often heavy), they “hat” was then draped in heavier cloth draping downwards and back. These “side panels” called “Lappets” were what created the iconic “look”. Later, other forms of construction were used to make the basic “shape” of The Gable Hood. It was considered a sign of Office and breeding (Nobility), and was seldom seen in Common usage (although much poorer versions were attempted by the Common woman). 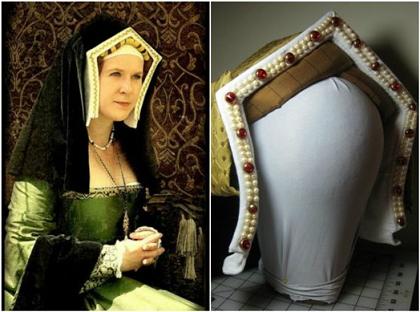