While the exact origins of the term is debated by Historians. Most attest that it is Scottish and may be much older than it's stated 15th Century AD mention. In truth, a Gaberlunzie was a Beggar or Vagrant. By unlike the common Beggar, who would most often be ''put upon'' by a Constable – The Gaberlunzie was a ''licensed'' Occupation (or at One who was ''immune'' from prosecution for Vagrancy).

The Gaberlunzie bore a special ''badge'' which was worn on His outermost garment. It was ''stamped'' with a form of identifier or signet, identifying the person as being authorized to ''beg'' monies (alms). They could not ''beg'' for food or other items. These were to be paid for from their ''earnings'' failure to follow these somewhat ''simple'' instructions would result in forfeiture of One's badge and possibly physical punishment (The Pillory).

An older ''legend'' cites that a Nobleman or King was authorized to ''elevate'' a Beggar as such – giving a form of ''income'' from begging alms. It was said that The Gaberlunzie was to be issued clothes paid for by The King;s Treasury, so as to look ''presentable'' (but much of this is still speculation). Most examples were presented in 19th Century Scottish Literature.

However, many surviving examples of Gaberlunzie Badges still exist today. 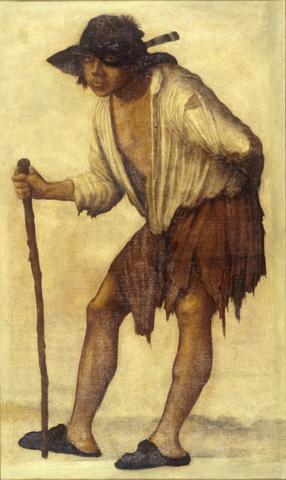