In theory, 14th Century Fusta-Class of vessels were small Galley Ships. Powered by Oar (human) and Sail (wind), Fusta's were staffed by 12 to 18 crewmen to man the Oars for propulsion. They were fast and featured a shallow draft. Built with a single Mast (featuring a triangular sail), they were popular with Barbary and Corsair Pirates for their low profile and speed. In war terms, The Fusta could move in fast for the attack. They were often armed with 2 to 3 small cannon (2 to 5-pound types). Debated as a Spain (or possibly Ottoman) invention, after Spain's Naval “footprint” began to wane, so did the use of The Fusta (other than their use by regional Pirates). 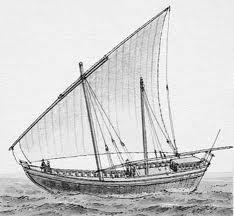