Medieval Commerce was greatly enhanced by The Fur Trade. Considered a “luxury item”, Russia was the central source of furs. They were traded into Western Europe, The Byzantine Empire and Asia. Furs came to denote social position (especially among Nobles and Royalty). Furs would eventually become more valuable than plain pelts or animal skin. Often set a clothing trim, in one famous use – King John of France had an entire fur coat made of over 366 fur pelts. Fur Trading was a complicated process. First furs were gathered. The Labor force came from local Peasants who did not have access to usable farm land. Their livelihood was to gather, kill and skin the animals used. The most prized were ermine, sable, weasel, squirrel, bear and beaver (to name a few).

If these types of animals were not available, then hare, rabbit, lamb or wolf. The furs were then procured from the peasants, via tax collectors or force. Far trade was only an option! Often Raiders would attack (after their harvests). The “collection method” completed, the task of transporting them came into place. Overland (which was expensive) and Sea Port shipping would transport the furs to the Merchants and eventual buyers. Germany dominated the “Merchant end” of the Trade, working in tandem with independent Muscovy (a development of large Merchant concerns). In the 15th Century, The Russian State took over Muscovy (and eliminated German influence). 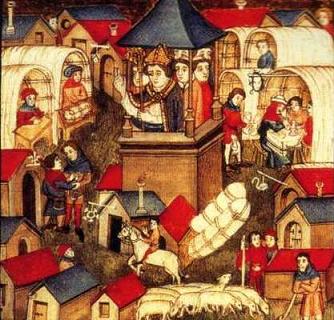