The Fort Sumter Flag is best known as the unofficial Nation Colors which flew over Federal Fort Sumter at the time of it's attack by Confederate Forces – in Charleston Harbor, South Carolina. This engagement was the start of The American Civil War. The Sumter Flag remained aloft throughout the 26-hour bombardment by Rebel Shore Batteries. Raised by Sumter Commander Major Robert Anderson, it is thought that his wife may have had the flag made for him (upon his posting as Commander of the Fort). A standard red and white stripe design, the upper Canton is blue. The 5-pointed stars are arranged in an unusual diamond pattern (to display the States Stars). The Sumter Flag was badly damaged in the attack. Lowered with Anderson's surrender of the Fort, it was displayed in New York City for a period (as a recruitment tool). After the War, Anderson raised the same tattered flag again over Fort Sumter (in ceremony). The original flag is still displayed at Fort Sumter. 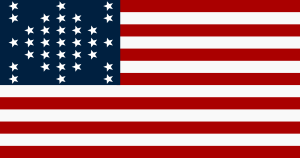